Some sources claim that one out of every 236 people becomes a victim of human trafficking. Even more startling, sources state that every 30 seconds another person becomes a victim of trafficking. Now, most people already know that the drug trade is probably the most lucrative illegal commerce in the world. But how many people know that human trafficking is running close to the drug trade – very close.

Every year, thousands of men, women, and children become victims of human trafficking. According to the US Department of Justice, human trafficking has become the third most profitable illegal criminal activity conducted by organized crime in the world. The US Department of State estimates that 800,000 people are internationally trafficked each year and over 14,000 are trafficked “into” the United States annually. Further, the Department of Justice states that over 200,000 American children are trafficked into sexually slavery. Apparently, these victims are enslaved into the sex trade, followed by domestic servitude and then labor. The DOJ also states that 70% of the victims are females and 50% of all victims are children. In addition, victims are trafficked into enslavement as child soldiers, child brides, beggars, manual laborers, sweatshop workers, and landmine removal workers. Overall, there are more than 27 million people trafficked throughout the world at any given time.

Perhaps more important is the fact that these people are not just society’s “throw-a-ways.” Many of them have higher education degrees, were professionals or were people seeking better employment opportunities. Once thrust into the world of trafficking, they are subjected to physical, mental, emotional, and sexual abuse. They are threatened, coerced, deceived, and considered possessions to be exploited repeatedly for gain.

But what exactly is human trafficking and how do traffickers conduct their trade?

Trafficking is defined as the recruitment, transportation, transfer, harboring and receipt of persons by means of threat, the use of force, or other forms of coercion, abduction, fraud, or deception for the purpose of exploitation. Now, it also includes the abuse of power, position, the giving or the receiving of benefits to achieve control over vulnerable persons without their explicit consent.

When we consider the method of trafficking, we will find that it possesses three distinct elements. The first element is the act itself (what is done) – that is, recruitment, transport, transfer, harboring, and the receipt of persons. Next, is the means (how it is done) – threat of the use of force, coercion, abduction, fraud, deception, abuse of power over the vulnerable, and the giving or receiving of benefits. And finally, the purpose (why it is done) which is exploitation. This includes prostitution, sexual exploitation, forced labor, slavery or similar practices, removal of organs, and other types of exploitation. Further, the criminalization of trafficking includes attempts to commit a trafficking offense; participation as an accomplice in such an offense; and organizing or directing others to commit such an offense.

The United Nations Office on Drugs and Crime has drafted laws and created national anti-trafficking strategies to assist countries in their efforts to develop local expertise and capacity to combat this scourge. Through the adoption by the United Nations General Assembly in 2000 of the Protocol to Prevent, Suppress, and Punish Trafficking in Persons, Especially Women and Children, a significant move was made to stop the trade in persons. These protocols are designed to strengthen and coordinate a criminal justice response to human trafficking and the smuggling of migrants./span> 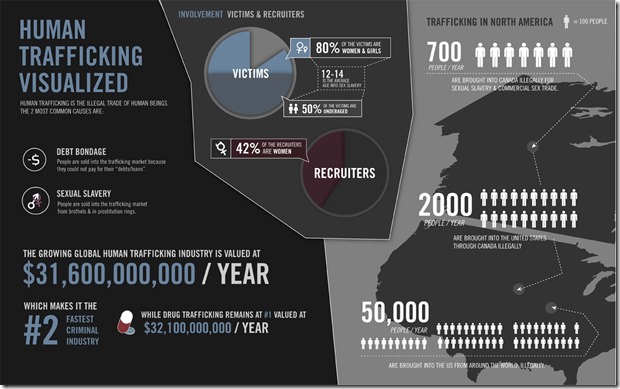 Additionally, it is estimated that in 2004, human trafficking generated 7 – 9.5 billion dollars and is thought to be one of the fastest growing activities of trans-national criminal organizations. Further, in 2008, the United Nations estimated nearly 2.5 million people from 127 countries were trafficked into 137 countries around the world. Also, they estimate that the cost of a victim is U$90 which in comparison to the slave trade of the 1800s is drastically less. The average slave in the 1800s in America was equivalent to U$40,000.

Now, trafficking for sexual exploitation is defined as the movement of people, usually women, between countries for sex work with the use of physical coercion, deception and bondage through forced debt. On the other hand, labor trafficking is the movement of people for the expressed purpose of forced labor and services usually bonded labor, involuntary servitude, domestic servitude and child labor. Trafficking in organs involves the selling of organs in exchange for money or goods but the victim is usually not paid or paid less. These organs may be removed voluntarily or when a patient is treated for another medical problem and their organ is removed without their consent. Finally, forced marriage is when a participants is married without their freely given consent while servile marriage is the selling, transferring or inheriting of a person into a marriage.

It is also important to mention that poverty, lack of education and economic opportunity has lead many women to voluntarily migrate and become involuntarily trafficked into sexual slavery. Less wealthy countries have fewer options for earning livable wages. And, the impact of Globalization makes it easier for people to make the decision to migrate and thus become vulnerable to trafficking. Finally, we must also consider gender inequality and how it prevents women from participating in formal employment usually pushing them into informal circumstances and risks.

“Forced and servile marriage in the context of human trafﬁcking”. aic.gov.au.